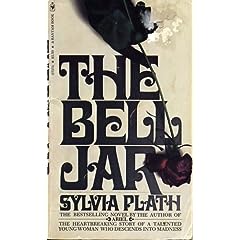 Steph in the City posted today about books she loved while she was growing up, and so I thought I’d do the same here.
Sylvia Plath’s The Bell Jar profoundly touched me in a way I can’t begin to explain. Her writing is effortless, engaging, and haunting. The book is autobiographical with fictional elements and chronicles protagonist Esther Greenwood’s descent into depression.
Plath has put pieces of herself into Esther. It’s abundantly clear that it’s essentially her story. That story is sometimes wickedly funny with some horribly painful parts mixed in. She unabashedly bares her soul to the world and I love her for it.
Esther walks a very fine line as a young woman coming of age in the 1950s—to marry and become a housewife, or to seek out a career of her own? I can relate so well to her feelings of isolation and her girlish naivete. The descriptions of her electroshock treatments are striking and wrenching. She tells her tale in the characteristically simple, clear, and concise fashion she’s known for. Every time I read this book I have a hard time putting it down. I’m left unable to distinguish between Sylvia and Esther because so many things in the book mirror actual events in the author’s life. I catch glimpses of myself in the story.
Plath took her own life at the tender age of 31. She put her head in her oven with the gas on while her two young children were sleeping.
This book makes me want to become a writer. It’s so honest and real. You have to read it and see for yourself.