Saturday night The Father Load and I went to see Eclipse. Since I know many of you lack my enthusiasm for the Twilight series, I shall spare you the gory details Jacob and Jasper are HAWT! We got home a little after 10 p.m. and chatted  a bit with my brother-in-law, who was visiting for the weekend and sitting for the girls. Hubs and his brother went downstairs to play Wii and I took the dog outside to potty a few minutes later.

When I stepped onto the front porch with Monster, he immediately started growling. I followed his gaze across the street and saw a gaggle of teenage girls frozen, looking at me. There was a ton of toilet paper hanging from my neighbor’s trees. I smiled and gave them an enthusiastic thumbs up, but I think in the darkness they still weren’t sure which team I was on.

They needn’t have worried. I’m not so old that I’ve forgotten the fun of rolling (or “T-P” ing, as it’s referred to in the Midwest) a cute guy’s house.

One of the girls came running towards me from across the street and as she came closer I realized she was one of our babysitters. I started snorting with laughter and told her I’d keep her secret. She grinned, said a quick, “thank you!” and hurried back to join her friends. I dashed inside to call hubs and BIL up to witness the debauchery. By the time they came out onto the front porch, the getaway car (a minivan, no less) was waiting and the girls were finishing up their handiwork. The Father Load laughed and said, “Boy, they did a terrible job,” and for a split second, I think we all silently considered running over to help them.

One of the few times I ever dared to participate in something like this I was 12 years old, and my parents figured it out and made me return the next day with my friends to clean it up. I made a mental note then that it was really stupid to roll my crush’s house when he lived on the same street as I, only about five houses down.

I’d like to think when it’s my kids doing the rolling, I’ll be driving that getaway minivan.

P.S. Stay tuned for a green post on Friday, when I’ll be linking up with Deb over at Menopausal New Mom. If you’d like to do your own green post then too and link up with us, we’d love it!

P.P.S. I will be heading to Houston the weekend of 7/16 to visit Lee the Hot Flash Queen and Tracie of Stir-Fry Awesomeness. If you live nearby and would like to get together, please give Lee a holla! 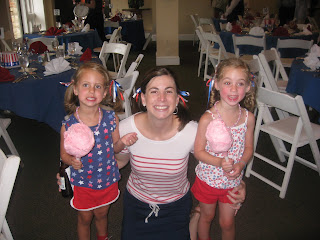