Yesterday I was doing some shopping for Shortmama’s Spring Swap, and of course I also found a little something for myself–an inspiring set of earrings from one of my favorite stores, Stuff. I love Stuff because it features the work of local artists, sells lots of environmentally-friendly, or “green” things, and there are always plenty of unique gifts to choose from. 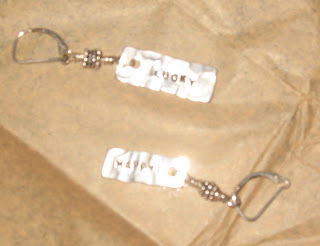 (it may be hard to see, but the top one reads “lucky” and the bottom one reads “happy.”)

I splurged on these as a reminder, because sometimes I get so bogged down by the daily grind that I forget how lucky I am.

This time of year the grass is getting greener, the birds begin singing their sweet songs again, and our allergies turn us into snotty, sneezy fools. And I’m reminded of the ducks that befriended me in late March of 2005.

One day while I was getting a drink in the kitchen, I heard some quacking coming from my front door. I thought I was simply delusional from all the fertility drugs coursing through my veins. But I looked out the window and sure enough, saw this pair cruising my front yard: 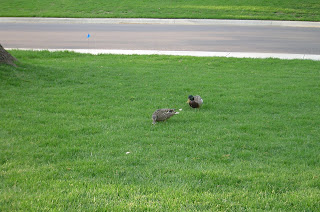 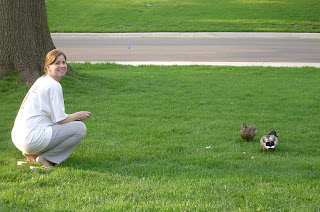 They let me get close and feed them by the 2nd day (I’d prepared with lots of cheap Wonderbread just in case). 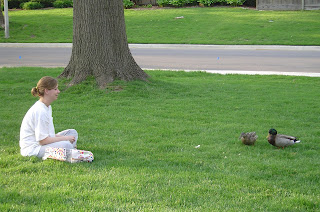 We don’t have the photos to prove it, but they also later ate the bread right out of my hand… 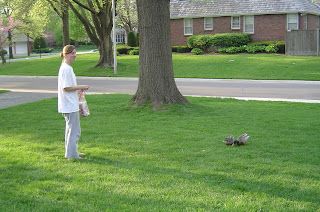 (I look like total crap, but in my defense I was going through a lot and was in a funk)
These ducks were the only reason I got out of bed every day during the last week of March, 2005. It was the end of the road—our second round of IVF (in-vitro fertilization). I was convinced that like all the other things we’d tried before, it was going to fail. But the ducks kept coming back each morning. I concluded that they were a couple, a male and a female, and sure enough I discovered their nest nearby with several eggs inside.
These ducks were sent to me. We needed each other. We needed hope. Just as they were foraging for food and tending to their eggs, my own little embryos were growing in a Petri dish in the lab: 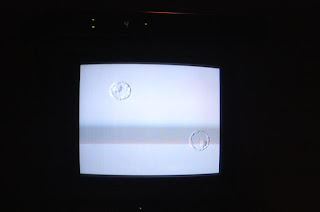 Those ducks kept me alive that week. I looked forward to their visits and waited anxiously for them each morning. They didn’t disappoint. I talked to them, told them about my fears in low whispers while they gobbled the hunks of bread from my hands. Their dark, probing eyes consoled me while tears dripped down my cheeks. They quacked that things were going to be alright. They embraced me so easily and so fully that I began to feel my dream of becoming a mother was just within my reach.
Then we got the happy call from the embryologist that we were ready to go. My doctor transferred two really good lookin’ embryos to my uterus. And during my mandatory bed rest afterwards, my mom (who flew into town to make sure I remained horizontal) faithfully fed my ducks for me.
About 18 weeks later I looked like this: 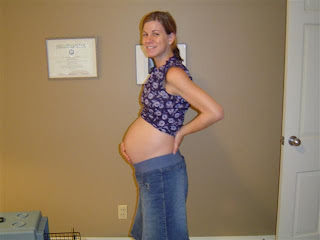 And now we have these (pictured with The Father Load): 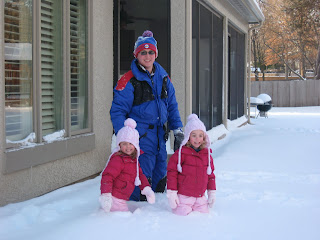 We are indeed happy. And lucky.