**I must preface this by saying that my dad and his partner, Kory, visited Japan a while back and fell in love with the toilets there, which normal people like us would describe as bidets. They loved them so much in fact, that when they recently moved to their new home in Mississippi, they installed several of them. Pictured is the control panel for said toilets. Sadly the flash impairs your ability to read the orange button, but all you need know for the sake of this guest post is that it reads, “STOP!” Read on for my brother Kevin’s review of these novel items. Yours truly was too afraid to try them out, but I knew I could count on Kevin. While you all know I love being green and this contraption eliminates the need for toilet paper, I just can’t seem to climb on board. Would love to know your thoughts. Thank you, Kevin! 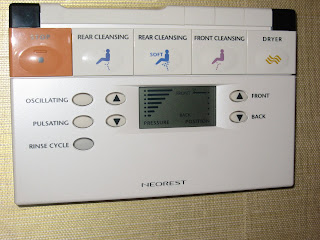 Gross. Disgusting. Revolting. Repulsive. Trained from an early age to confine bowel movements to prison cells of embarrassment built with bricks of shame, it’s no small wonder that some people – mainly dudes – actually grow to appreciate the art of defecation. Being such a dude, I relished the opportunity to refine my excretory experience during the Christmas holiday.

I arrived at my dad’s house in Hattiesburg as the obnoxious nuclear explosion of morning light settled into a far more acceptable afternoon radiance. Waking up before noon weathers away the soul, sure and steady as the wave conquers the rock. But Christmas Day would provide a pleasant (mostly) distraction from such negative morning analogies in the form of my squealing, smiling, crying, and giggling twin nieces. Their youthful exuberance kept everyone busy throughout the day until dinner. The piping hot, butter-rich holiday meal was devoured and little four-year-old girl toots signaled its satisfying conclusion.

At this point, the 27 year-old man gas in my stomach foreshadowed a momentous and potentially impressive waste evacuation. As if she sensed the impending destruction, my dear sister, awestruck by the complexity of the control panel, nay, command console, in the downstairs water closet, double-dared me to test drive the Japanese mechatoilet. Why not use a regular toilet the reader might ask? A lesser man might have done just that, but I am my father’s son and his sense of adventure and exploration is now my own. I would see that inheritance done proper and magnificent justice.

I number two’d in the classical manner and it was indeed of substantial consequence. Let me describe the aftermath and the toilet’s role in the ensuing reconstruction.

Things do not always work out the way in which one would expect. For example, I would expect a smart toilet to understand the delicacy of my chode. Perhaps some men and women are born with steel perineums and are referred to as Japanese. Mine, however, is constructed of mere flesh and sensitive nerve endings. Therefore, a default setting of maximum warp for the built-in bidet is not recommended for the average American user. Furthermore, the rear cleansing button showed a small one legged and armless man’s flat ass being softly sprayed by water droplets. Dots signify droplets. Perhaps the manufacturer failed to find clip-art for relentless fire hydrant-style butt-shower of pain. To be fair, one can adjust the pressure, but I wanted to experience the full measure of this device. One should keep his or her finger firmly planted on the STOP button when testing its limits. As for “Front Cleansing”…what is it for? I assume it’s only for girls because it wasn’t comfortable and I would prefer not to elaborate. The dryer, however, was the saving grace of the contraption. Like an angel whispering into your butt, the terrible memory of the abusive fire hydrant and its subsequent disastrous flood was all but erased by this angelic voice. The experience came to a conclusion and I exited the lavatory a cleaner and wiser man.