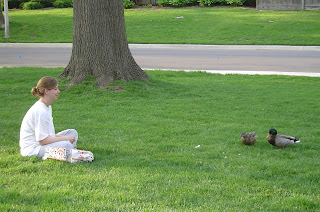 About this time every year I recall my ducks, who befriended me in the spring of 2005.
There were two of them, a male and a female. They only ever visited me together.

In March of 2005 I began my second IVF (in-vitro fertilization) cycle. I was desperate to become a mother and we’d already exhausted everything else: several rounds of Clomid, IUI without injectibles, IUI with injectibles, and our first round of IVF. I have PCOS, or Polycystic Ovarian Syndrome, and this essentially means I do not release eggs on my own; so in order to have children, I required assistance from a Reproductive Endocrinologist. The treatments are physically and emotionally exhausting. After so many failures and after putting my body through so much, I decided this second round was IT. I didn’t want to go through it all again. I told Dan if it didn’t work, I’d like to adopt, and he agreed.

One day I was up early for a regular appointment with my RE to see how things were coming along. I kept hearing something outside as I was getting dressed, but couldn’t figure out what it was. Finally I went to the front door (my dog was going crazy at this point) and saw two ducks in my front yard. I ran into the kitchen to grab some bread. Delighted, I quietly and slowly opened the door and approached them. Amazingly, they were not at all frightened and waddled right up to me. I began to feed them hunks of whole wheat bread and they devoured it, even taking it right from the palm of my hand. I’m an animal lover and this was beyond my wildest dreams—ducks in my very own front yard!

I told my mom and my husband about it later and the whole visit really improved my mood. IVF is grueling and during this round it became increasingly difficult to remain positive. But these ducks made my day and I knew I’d never forget them.

Lo and behold, the ducks returned the next day. And the next. And the day after that. It seemed I had really made some friends. I began to take it as a good sign. I decided that this was a momma and daddy duck, and that somewhere nearby they had a nest with their eggs/ducklings in it. And that they were only leaving them briefly to forage for food. I gave it to them, they’d have their fill, and fly away….

Meanwhile, my own eggs were maturing and growing inside of me, and the ducks had given me hope. I felt that this was a good omen, and I began to dream again that motherhood was not out of my reach. Soon, the ducks became brave enough to come up onto my front porch and wait at the door for me in the mornings. It was so sweet, and many times I was brought to tears when I woke to find them quacking and waiting for me (of course, these emotional times could have been in part due to the vast amounts of hormones I was being given at the time!).

I even have photos of them, one of which you can see here. I had just had my eggs harvested that morning, I believe, and had been in bed most of the day (so I look like total crap, not that this is that different from how I usually look). At any rate, my mom flew up here to help me out while I was on bed rest after the embryo transfer. I’d told her all about my little friends and was hopeful they’d still be around when she arrived. They were. My mom couldn’t believe it and also took it as a sign that good things were going to happen. She fed the ducks for me while I was stuck in bed.

On the sixth day after the embryo transfer, I started bleeding.

On the seventh day after the transfer, I was so hysterical my doctor let me come in a day early for my pregnancy test (typically you have to wait until the 8th day, but I needed to know this was over so I could move on with my life).

On the afternoon of the seventh day, I got a phone call from the nurse that I was pregnant. Very pregnant, she said. In fact, my numbers were so high they thought it might be twins. But you can’t confirm this until you have an ultrasound. My doctor increased my progesterone dosage and within 2 days, the bleeding stopped.

I remember sitting out in the front yard with my ducks, crying, before I knew the IVF had worked. I remember how it seemed they were sent to me for a reason, but I couldn’t comprehend why—if things weren’t working out for us. It was bittersweet to have them there with me. They were watching over me.

Several days later, the ducks were gone, and I never saw them again.

Seven months and 5 days after I got my positive pregnancy test, my twin daughters, Abigail and Isabel, were born. My girls love ducks, too, and I look forward to the day I can share this story with them.