(Most of you know Monique, Trifecta member, over at A Day in the Life of a SurferWife. She is famous for her weekly posts on various celebrity encounters (read: I am totally stealing her idea with this one). Please head over to read them, tell her I sent you, and follow away!)

It was fate, and it was going to be EPIC.

I skipped into Rainy Day Books last Wednesday after my class at the JCC looking for a book my professor had recommended because I’m nerdy like that. They didn’t have it, but they had another book I wanted, Anita Diamant’s latest, Day After Night. As I was checking out, I noticed a flier for Chelsea Handler’s book signing event for her brand new Chelsea Chelsea Bang Bang. 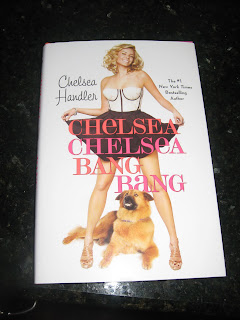 I nearly passed out right there in the store. Struggling for breath, gripping the counter to hold myself up, and fearing my eyes were playing tricks on me, I peppered the saleswoman with questions.

“Chelsea Handler is coming HERE on FRIDAY?” (affirmative)
“You mean HERE, to Rainy Day Books?” (affirmative)
“I get to see her? All I have to do is buy her book and she’ll sign it?” (exasperated, but affirmative)
“Wait, let me get this straight. Are you sure I will get to meet her? And she’ll really sign my book?”
“Tell me again how this works.” (eye rolling from saleswoman, coupled with an audible sigh)

I hurriedly paid for my book, raced home and began the search for girlfriends to accompany me. I mass emailed, I tweeted, I texted, I called. I left many ridiculously annoying messages. Shelly Kramer and Lara Shelton came to my rescue. Here we are waiting outside in line last night: 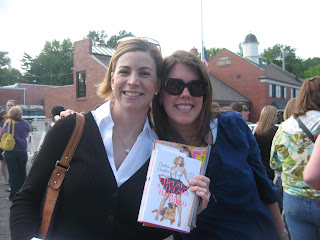 (I’m on the left and the crafty, creative Lara of La Plates is in the sunglasses) 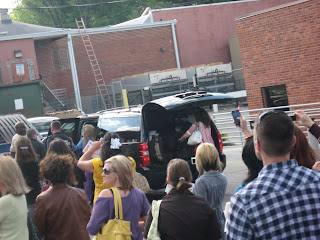 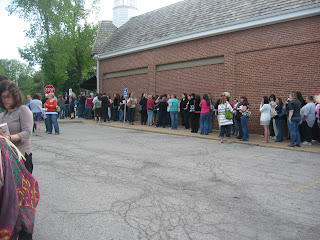 (The line to get in was long & snaked around. But it moved quickly) 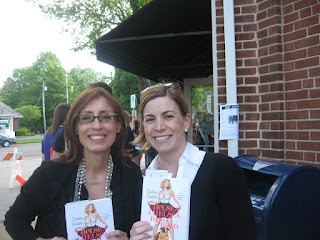 (Shelly Kramer (Twitter Queen, Social Media Expert) on the left & me on the right, just about to get in)

So I get into the bookstore and there’s another line. It’s like that movie Labyrinth, only with books and shelves instead of tall green hedges. And there’s no David Bowie. I’m getting all swirly and disoriented and claustrophobic. The line keeps inching forward very quickly and I’m balancing my baby wipes, ticket, and book (baby wipes were a gift for Chelsea, if you don’t get it then you haven’t watched last week’s shows) while thinking of funny things to say to impress the Queen of Late-Night Comedy.

“Shalom, Chelsea! Welcome to Kansas City. Here’s some homemade challah (I honestly thought about doing that but she’d probably think it was laced with laxatives or something and just throw away my hard work) for you!”

“Good Shabbos, Chelsea (It was Friday evening, after all)! You are my long lost Jewish sister! Will you please write, “To the Best Little Mensch in the Whole Wide World: I Love You! Love, Your BFF Chelsea.”

“Chels, I figured you might need some baby wipes to freshen up before your gig at the Starlight. Not that you smell or anything. You could never smell. I mean, you’re like, perfect and gorgeous and so funny and smart! (then blubbering)”

While I was waiting in the snaky line, I stopped and took a photo of books that you must own if you have a girl. If you don’t already own these, get thee to Amazon.com immediate to rectify this deplorable situation: 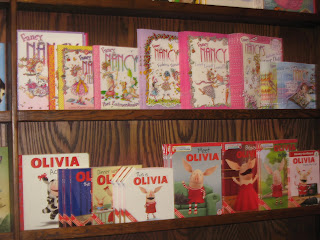 Anybook, the moral of the story is: I am not Surferwife. I was not all cool, savvy, and prepared. I take terrible pictures. They wouldn’t allow photos with Chelsea, and the closest/best shot I got of her was this one, take it or leave it: 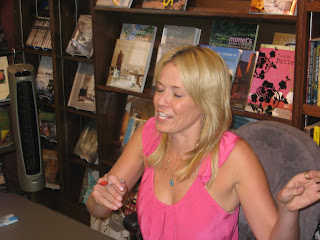 I was shoved in front of her so fast it made my head spin. She said, “Hey Erin,” and started scribbling while I blabbed about the baby wipes I’d brought her so she could freshen up before her stand up at Starlight. She smiled and had a glazed look about her and then I was pushed directed towards the door where I had to make my exit. It happened so fast it was a blur, but definitely nothing like I’d anticipated. I had hoped for some real interaction, but apparently my gift was crap compared to what my kiss-ass friend Lara gave her. Go here to read her take on the evening.

And here’s my autograph. I really wanted her to make it out to “Peaches,” (you won’t get it if you didn’t see last week’s episodes) but there was a scary bossy woman who said it had to be just your name and that was all she would write, and clearly my name isn’t Peaches. 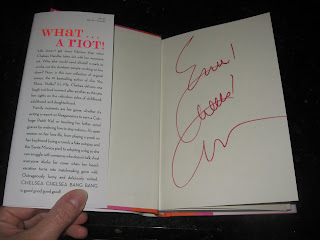