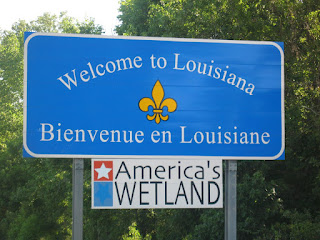 Yesterday we returned from our week-long stay in New Orleans. The girls and I were there for a full week, but Dan came back to KC several days sooner to play in a golf tournament.

We had a blast! The girls rode on the streetcar for the first time, ate beignets & seafood, went to the aquarium, hung out by the pool, and played with Gigi, Pop Pop, NaNa, Great Uncle George, Uncle Kevin, Uncle Markie, Auntie Katheryn, and their one and only cousin, Livy (affectionately referred to as “Liv” or “Livy Lou”). I will add photos in a separate post since I clearly still do not have the hang of this blogging stuff. It was a whirlwind week overflowing with fun, sun, good food, family and friends. This trip was markedly easier in some respects, though we did not get a ton of sleep. As the girls get older, they’re becoming more portable and it’s therefore less stressful for yours truly. I’m still sad that there’s no direct flight between KC & NOLA, but we’ll survive.

Yesterday marked a milestone for me as I faced my worst fear: traveling solo by plane with my twin daughters. We flew down as a family of four, but Dan came home first while the girls and I decided to stay and play for a few more days. This meant I was outnumbered two to one. And I’m not a great flier to begin with (turbulence is not my friend). However, I can honestly say they did great on the way back yesterday. It helped that I prepared with lollipops, snacks, books, toys, and the portable dvd player. A lot of crap to schlep, but well worth it. We managed to check in, check our bags, trudge through security, use the potty, and buy a bottle of water just in time to board (I didn’t want to get there too early because too much spare time in the airport with kiddos is generally NOT a good thing). I told the girls that if they didn’t behave, the pilot might make us get off the plane and refuse to take us home. This actually seemed to do the trick, much to my surprise and delight.

But the questions were endless and irritating.

“Mom, why aren’t we moving?” (this was often asked in-flight and really grated on my nerves)

“Mom, can I have a(nother) snack/drink/sucker?”

“Mom, why did Livy have to stay in New Orleans?”

It literally did not stop for the duration of the first flight. Even Finding Nemo didn’t really interest them for long, much to my chagrin. They did enjoy their little tray tables and did some coloring that way, which bought me maybe 10 minutes. The nice thing about flying through Dallas was that each of our two flights was short enough that we didn’t have to use the plane potty (my ultimate pet peeve/skeeve-me-out thing). Maybe I just got lucky. Maybe I instilled such fear in them about said potty that they decided it wasn’t worth it. Maybe I did a good job at limiting their liquid intake. I don’t know, but I’m just glad they waited and used the restroom at the airport (which isn’t much better, but at least it’s a lot larger and washing hands is a heck of a lot easier). I confess I spoke about the airplane potty in such a way that they wrinkled up their little noses. I told them it was very dirty and scary and that we wouldn’t all be able to fit inside, so that meant someone would have to stay outside all alone…and to them, that is very scary! I spoke at length about how I myself would use the potty beforehand and then wait until we got to the airport to go again. Well, whatever it was, it worked. Whew!

When we landed in Dallas we had a long layover (made even longer b/c our first flight actually landed early!!). We used the restroom first, and then found a Chili’s where we sat and ate some lunch. We rode the escalator and then the tram to our terminal (they loved that). Lo and behold there was a children’s play area next to our gate (I LOVE YOU, DALLAS AIRPORT!). They had a blast and burned off some energy before we boarded our final flight.

Once we got on the plane heading to KC, the girls’ curiosity was sparked–they wanted to know who was flying the plane. The flight attendant overheard this as we were climbing in and offered us to step inside the cockpit, which we did. The pilot and co-pilot couldn’t have been nicer and introduced themselves to the girls and asked them their names, told them a little bit about the plane, etc…it was great. I was so busy trying to scoot out of the way of the other boarding passengers that I didn’t think to grab my camera—but it would have made a great shot, the two of them standing there, mouths wide, eyes darting all around at the lights and switches. Abby promptly announced her desire to become a pilot. Today. And then I spent the next 10 minutes explaining to her she doesn’t even know how to drive a car yet and much school will be necessary in order for her to become a pilot.