(If you still haven’t entered my Get Your Green On Giveaway, please check it out. You could win a monogrammed/personalized reusable tote from Lara @ La Plates! And if you can’t wait or don’t win, there’s a discount code for you to grab while you’re there!)
I’ve been paying it forward lately, doing good things for good people—because they deserve it, and because it comes back to me tenfold. It makes me feel better about myself. Sending good karma out into the world where it can float around, alight somewhere, only to flutter away and land again upon some other unsuspecting but deserving soul is a powerful and liberating feeling. I’m addicted.

We recently held our annual fundraiser for our local chapter of the Alzheimer’s Association. It’s called Memories in the Making, and it features watercolor paintings done by Alzheimer’s patients in art therapy programs in KC & surrounding areas. The art is auctioned off and the funds raised go towards research, education, and programming. Because I’m on the board, I was lucky enough to preview the art ahead of time and decide which piece we’d bring home tell Hubs how talented all the artists were. I’d fallen in love with this particular piece by Ken Roberts: 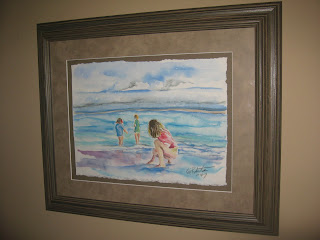 “Day at the Beach” By Ken Roberts, 2009
Interestingly, Ken was born a twin in Wichita, KS, in 1936. He joined the Navy at 18 and four years later he began studying at KU, where he earned his BFA. He will tell you he is a photographer with 35 years of experience, but in his modest way, will deny that he is a painter. He worked for the Kansas City Star as both a layout artist and advertising art director, and for The Sun as creative director. He enjoys the beauty of nature and has said, “I have old fashioned ideas about art.”
The auctioneers, the Nigro Brothers, were amazing and they allowed me to borrow a hat and pose for photos. 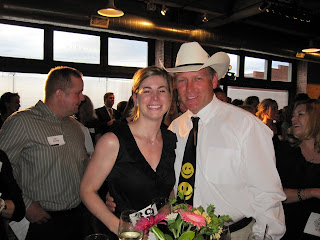 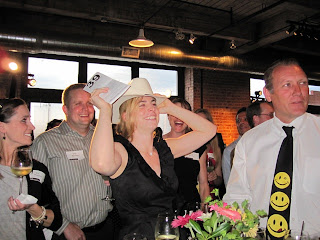 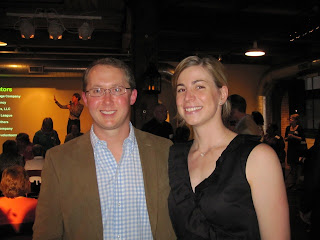 Me & The Father Load 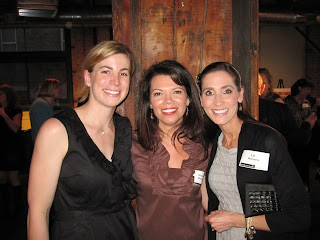 Me with Jennifer and Liz who were some of our guests that night.

Then I had the privilege of meeting Ken Roberts, the artist (& Alzheimer’s patient) himself. It was a moment I almost have no words for. I thought back to reading Still Alice, and back to the day Hubs’ grandmother died— the day I knew this was a cause I wanted to become heavily involved in. Hubs’ grandmother succumbed to Alzheimer’s while I was pregnant with the girls. Unfortunately she never got to meet her great-granddaughters, but I know they would have been bosom buddies. Helen and her husband, Ben, both treated me like I was their granddaughter. Helen is the one who dubbed our Mini Poodle, Monster, “The Mons Mons,” a nickname that has stuck ever since.

I got into a bidding war, but I was intent on winning this piece. And win I did, in more ways than one. It was a win for Ken, a win for Alzheimer’s, a win for Helen, and for all the others who have suffered needlessly at the hands of this horrible disease. It was a night of celebration, of knowing we will never give up. We will not stop trying until we have a cure. It was a night where I felt like I was making a difference. 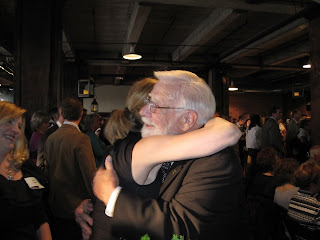 It was an emotional moment and I asked Ken if I could give him a hug. He indulged me. 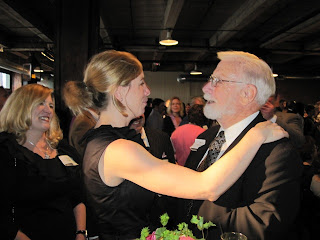 He told me the painting was of his granddaughters. I choked up. 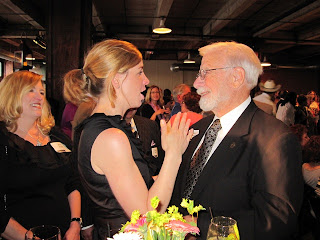 Then I began to blabber about my girls & how I fell in love with his painting months ago when I first saw it.
A Day at the Beach now has a prominent place in our foyer where everyone sees it when they walk in.
Then last week, my friend Shelly Kramer of V3 Integrated Marketing told me about a cause near & dear to her heart, Veronica’s Voice. It’s an organization dedicated to social change for American victims of commercial sexual exploitation (prostitution). Veronica’s Voice helps encourage, empower, and educate them so that they can make lifestyle changes and heal their hearts and spirits. I was inspired and thanks to Shelly, I found their wish list on the site. I flew to Target and Dollar Tree and stocked up on shampoo, conditioner, toothpaste, toothbrushes, infant clothing, snacks, paper towels, and cleaning supplies. I called and set up a time to drop everything off. After I did so, I felt lighter and happier. I meant to take all my old magazines (Real Simple, Vogue, Elle, US Weekly, etc.) but I forgot, so I’m going to bring those to another type of shelter with some more things soon. I would love to volunteer there (or a gazillion other places), but until the girls start kindergarten, my free time is limited.

There is so much ugliness in the world sometimes I can’t stand it. The least I can do is take one piece at a time and try to make it beautiful.

How do you pay it forward? How are you making a difference in the lives of others?