(This is FICTION. I welcome any constructive criticism & appreciate your thoughts & comments! **previously published**) 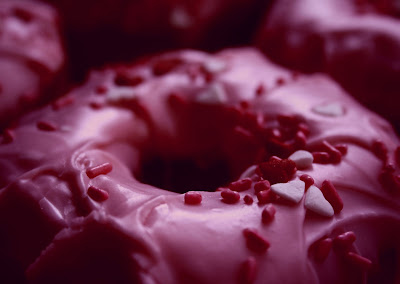 Amy waited in line at Quik Trip tapping her right foot on the dirty linoleum floor. The perfect pink donuts in quaint rows inside the Krispy Kreme box whispered her name. Then the Oreos, Twix and Reese’s peanut butter cups joined in, humming. Cool Ranch Doritos, hot dogs, and Funyuns spilled out of the top of her basket, eager to come to the party. Treetop apple juice, her favorite, to wash everything down.

It was always the same. The same things in the cart, but rarely the same gas station or corner store. Too risky, Amy thought.

After tossing some crumpled bills and change at the cashier who couldn’t even look her in the eye, she hurried with her goodies back to her car, which was parked on the side, away from the others. Slowly she unwrapped everything, saving the pink donuts for last, as was her ritual. She needed a marker, something to show her when she was done. Bright pink Krispy Kreme sprinkles were easy to spot.

Amy opened the familiar green and white box and stared. So neat, so pretty. Dainty, even. Until she reached in and started stuffing her face. One down, 11 to go. Then ten, nine, eight…until only one remained. A single tear slipped down her cheek. Quit being such a goddamned baby, she reprimanded herself.

The food was delicious at first. But a few minutes in, she stopped tasting and mechanical movements took over. The sweating began, the race to the finish line. Shoveling food in, more and more, gulping faster and faster, she couldn’t stop swallowing. She hated herself in those moments. Oreo crumbs in the corners of her mouth and stuck in her teeth. Stinky Doritos breath, sticky fingers covered in melted chocolate, empty food wrappers littering the floor of her otherwise clean and pristine car.

When the last peanut butter cup disappeared and only crumbs remained in the Funyuns bag, Amy checked her mirrors to make sure no one was around before grabbing the remaining Oreo and getting out of the car. Walking slowly towards the back of the Quick Trip, she savored the last bites of cookie, which now tasted sickeningly sweet.

After a final glance around to determine she was alone, she found a spot next to the dumpster. She didn’t even have to put her fingers down her throat anymore, the habit was so ingrained. Her body knew what she wanted it to do. She bent over and retched violently as her hand reached into her jeans pocket for a tissue.

Relief swam over Amy as she vomited again and again.

Your thighs are fat and your stomach is flabby, said a voice.

You’re ugly and no one really likes you, a second one chimed in.

You will never be good at anything, added the third.

Just then, she caught a glimpse of something pink. She hurried to finish the job.

You’re a coward, too, the voice came back. Taking the easy way out. Why don’t you just go to the gym?

Amy snapped up, swiping a pink trickle off of her chin with her sleeve.

“Shut the fuck up!” she screamed, and realized the whole store must’ve heard. She jammed the wet Kleenex into her pocket and ran to her car. As she raced from the parking lot, she chucked the empty Krispy Kreme box out the window.